Five made it to the July Skype meeting.

Tim Williams (our tech supremo who set the call up) was at the Bala Lake Railway, helping with their reopening after C-19 shutdown, but as a result of being busy with 1:1 scale railways and full time work was having very little time for model making. It did mean that we got a brief tour of the storage shed containing Triassic, Nesta, Alice, Winifred, 2 Rustons, a 1:1 scale kit of Holy War and the Model Rail model of the proposed new station at Bala.

Mac Strong also hadn’t been modelling much, other than giving thoughts to designing some legs for his Frem009 modules and a few ideas and suggestions were discussed by the group.

Julien Webb had also not been up to much, but had been progressing some of the 009 Society wagon kits through the paint shops and photography studio to produce images for the Society’s website.

David Churchill also had not been doing much model making, but instead had been spending time working on a new book about Darjeeling & Himalaya Railway rolling stock as an accompanying volume to his worn on the DHR B-class locos.

Blair Hobson also joined us briefly as having only just moved into his new house he didn’t have a decent internet connection. He also hadn’t been up to much on the model railway front due to the house move.

Thankfully bucking the trend of not doing much was Ben Powell, whose models of Oakhill (Peckett 0-4-0ST) and Jatibarang No.9 (the Statfold Barn 0-4-4-0T Mallet) both being scratch built from brass sheet and sections on rtr chassis (N-drive and Minitrix respectively) had been progressing very well indeed. 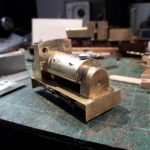 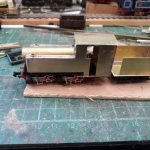 Other topics of conversation covered the vagaries of firing Quarry Hunslets and the possibilities (or not) for the rest of the 2020 events calendar.