Six made it along to the February online meeting thanks to Tim Williams, though some concerns were raised as it appeared that the efforts in arranging things had made Tim’s brain overheat with steam appearing to issue from his head! This was, however,  put down to the video background he had chosen (filmed taken whilst he was signalling at Llangower on the Bala Lake Railway).

Tim had been working on a working diorama based on some photos of snow clearance at Cwm Croesor on the (standard gauge) Ffestiniog to Bala branch. Built on some foam core boards the design incorporates a tray to catch the ‘snow’ as his 009 quarry hunslet Alice cuts through a snowdrift with a snowplough that Tim had 3D printed. Initial snow clearance trials using polystyrene balls had shown the concept worked, but Tim was looking into other snow substitutes, and how he might add snow to a model of Ivo Peter’s Bentley to add to the scene. 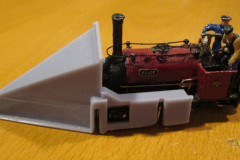 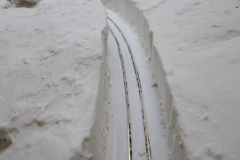 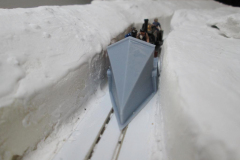 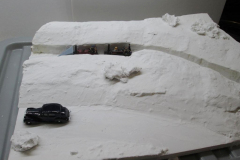 With Tim’s Diorama and the day’s fall of snow discussion turned to other snow moving equipment, and Julien Webb showed an article on the Jull Snow Excavator – essentially a big, rail-mounted screw that was turned to throw the snow off the tracks. Julien then showed the continuing work on the loading gauge busting loco collection, having cut new sets of connecting and coupling rods from nickel silver for the pair of 2-8-0 tender locos and pair of 8-coupled saddle tanks being built from converted HOn3 kits. 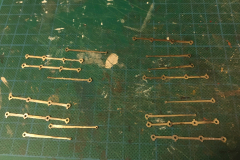 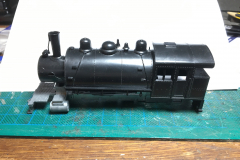 Ben Powell had added a custom turned chimney to the Sena Peckett to finish off the body, but the chassis had been sidelined by a bearing issue and Ben wasn’t sure it could be fixed without obtaining a new 3D printed chassis block, which might take a bit of time as its printing would have to fit in with Narrow Planet’s own production. In the mean time Ben had built another batch of flat wagons from Dundas Vale of Rheidol coach chassis and plastic U channel and had been fitting brick cladding, windows (laser cut wood and a nice hand-made round one for a gable end) and hand-cut header arches to the buildings on his industrial layout that is now dedicated to making beer. Ben also showed us some photos of a rather nice Peckett 0-6-0 tender loco and large 0-4-2 ST he had come across that might become future projects. 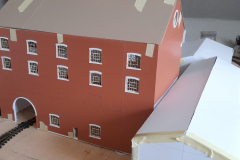 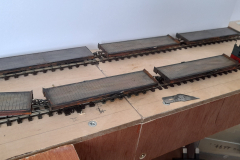 Mac Strong showed us his corrugated iron engine shed that had recently been glazed using liquid “Glu’n’Glaze” but he wasn’t happy at the results, so there was a little discussion as to how best to remove this so he could replace it with clear plastic sheet to get a more plate glass effect. He was also working on a 5′ long HOe shunting plank for his son-in-law, and had recently acquired a 3D print to make a Whickham armoured railcar similar to those he vaguely recalled from his childhood in Malaya. 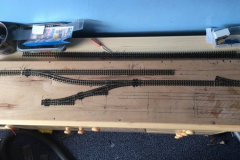 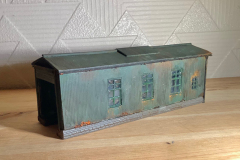 Charlie Forbes joined us again to show us a few more projects. These included a Polish kit for the LxD2 bogie diesel, an Indian ZDM4a diesel from a Shapeways 3D print, a bogie snowplough made from a card kit and mounted on some cast white metal war Department bogies and a weed killing train made up of a pair of water tank wagons (TT tanks on Peco 15′ n-gauge chassis) and a concentrate tanks wagon with hutch at one end for the operator, all being linked with pipes made from black elastic and 2 mm magnetic couplings. 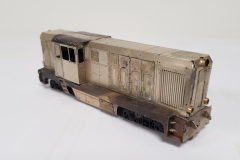 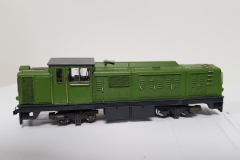 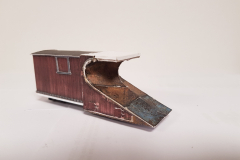 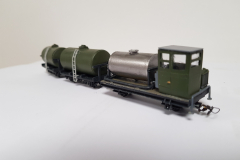