9 managed to attend the May virtual meeting (or virtual May meeting?) via the wonders of the Internet.

David Churchill showed us a pair of C50 Hungarian 4 wheel diesel locomotives built using some special order HO scale 3D printed bodies by James Hilton (based on his OO scale prints) running on Tomix TR-02 chassis that have been cut down to fit. 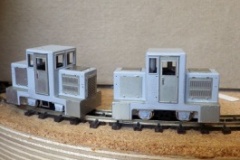 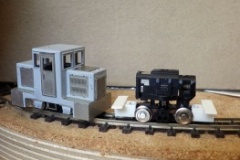 David had also progressed with the new Minitrains tram loco with the Tramfabriek conversion so the etched brass plates had been fitted along with some lining and it was awaiting a final coat of varnish.

Blair Hobson showed us around his new HOe Layout “Ostrovia” (https://www.youtube.com/watch?v=41e9UzLHjNM), where scenic work is progressing well, along with a selection of stock that included a pair of Posch Modell HOe C50s to compare with David’s and a blue MAV coach from the same source.

Mac Strong showed us progress on his 2 009 layout modules. These were seen at the February Moorfield meeting, but now one – a scene with the line crossing a small river – is largely finished and the other – a small station halt – is progressing well. Mac also discussed issues he has had with the Kato Portram chassis of his latest kit built loco, a Narrow Planet Alan Keef K12. 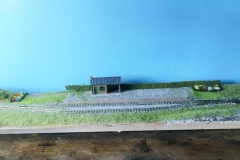 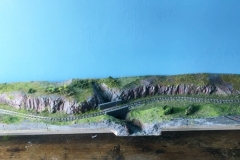 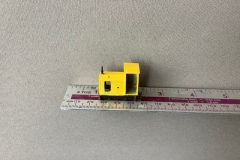 Tim Williams had been busy with his 3D printer, having made a new winding house for the slate quarry diorama (due for display at the Bala Lake Railway’s museum) along with a selection of ‘bar’ section rail. He also discussed a possible alternative power source for the HOf layout ‘Insulation Lumber’ seen last month in the form of a Wilsco D20 stationary steam plant linked to a dynamo. 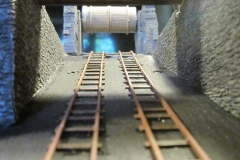 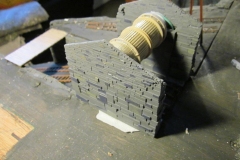 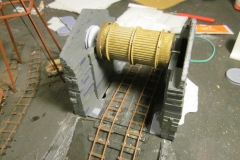 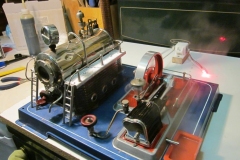 Steve Metcalfe announced that the Grainge & Hodder baseboards for his planned industrial layout based on the Bowater’s (Sittingbourne & Kemsley) system and showed us the first buildings, including an incinerator plant, made from American HO kits left over from his earlier modelling career. 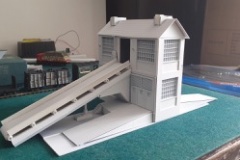 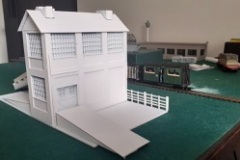 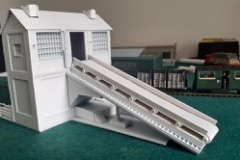 Ben Powell showed us progress on his new layout, an Ironstone system’s narrow and standard gauge interchange, that will include a Corgi face shovel that he had repainted from its LMS livery and weathered, along with a selection of narrow & standard gauge Pecketts. 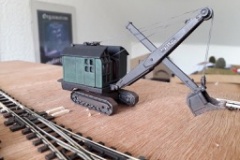 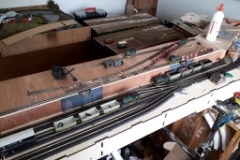 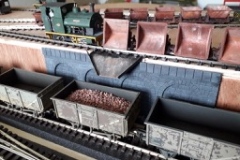 Julien Webb had been digging about in his lost projects box and had come up with some South African Railway’s 2′ gauge stock as a change from the brace of Gamecocks he had been working on. The wagons – a B class from a Worsley Works kits and a pair of DZ wagons from the Boston Largs kit – had been sprayed in a red oxide livery and the V-16 class guard’s van (Worsley) had been fitted out with full interior details (thanks to a set of plans from Will King) and was slowly progressing through the paint shops. Julien had also been keeping his kit stash restocked with the purchase of a pair of the new Narrow Planet Baguley McEwan Pratt ‘677’ 10HP Class 0-4-0PM kits and the requisite Tsugawa TGW TU-DB158 chassis from Japan and 12v motors from Tramfabriek. 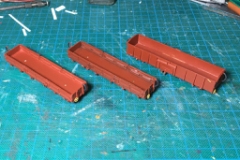 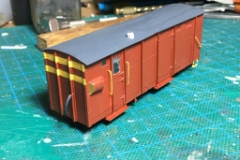 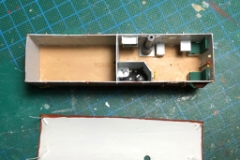